Posted on December 9, 2018 by goodyniosi 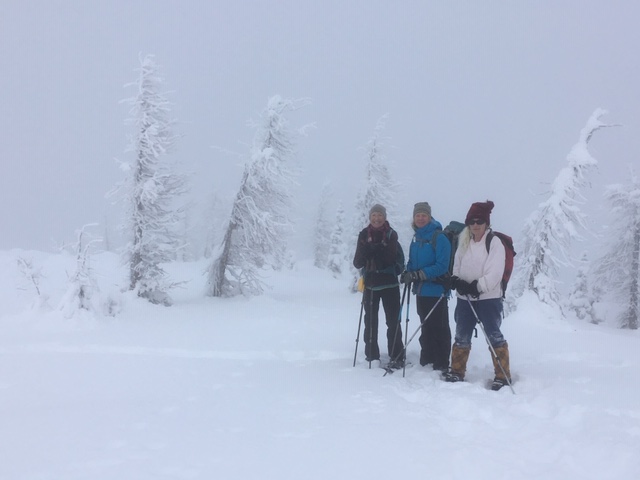 Well – there you are – the best way to fight the very short days, the deep, grey skies and the dark and cold – get up into the alpine. Thanks to Sheila Sinkie for the photo.

But that was yesterday – today it was about baking and then taking Abby up our local version of Pulpit Rock – namely, Payne Bluffs.

And now – going to make a huge curry stew. That should help.

It’s either that or drink half a bottle of wine every night and somehow, I don’t think that’s a great idea.

I was thinking today about social media and the conversations (!) we have on them. Specifically, a member of Rebel Media posted a piece saying that the new global accord on refugees and migrants would mean that Canada would lose its autonomy and we would be overrun with migrants and bad foreign people. This is, of course, utter nonsense and blatant hateful lies – and I reported the post.

What was interesting, was when I pointed out, pretty darn politely I may add, that this was not accurate and suggested to the people ranting about how awful the Liberals were to do this to our country, that they actually read the document, they came at me with pretty nasty name-calling. I then suggested that if all you had was name calling, you had already lost the argument.

My thoughts then turned to a friend on Vancouver Island – a friend who lived most of his life on the prairies, worked in the oil patch – all that stuff. Since coming to BC, he has discovered nature like never before and has had a total change of consciousness. He is now an advocate for the Green Party, drives an electric car and wants desperately to effect change. He is also a kind and diplomatic man and works hard to convince his prairie friends that change is smart and can work – he presents data and excellent information. He works hard at understanding their point of view, listening, presenting his case politely.

And you know what he gets from those people in return? Vitriol and unfriending.

This is pretty much what happens: progressives (liberals) tend to want to make things work for everyone – to create a better and kinder world – conservatives (Republicans etc) want power and to keep things the way they are. They tend to hate change. I look at what the Republicans are doing in the States – at the hate and fear of Andre Scheer right here in Canada and I have come to the conclusion that progressives must stop compromising – must stop trying to make nice with these people.

It’s time to stand our ground. As I said to my friend, if you are being unfriended for trying to save the planet, then you don’t need friends like that.

And I’ll take that sentiment all the way to government, politics, Ottawa and back. It’s way past time for progressives to stop bringing knives to gun fights.