Here’s the thing: while I’m walking (read – gasping and panting uphill) I think of all sorts of things I want to say in my blog. Then, when I finally get around to writing it, it’s all gone. Poof! I am left with writing something like, “yep – another hard day.”

But let me give it a shot. First, Swiss hospitality is pretty awesome. As an example, this morning I asked the hotel owner where I could buy a sandwich for lunch. Next thing you know, he presents me with a monster cheese sandwich and says, “no charge.” That’s just one example. Another, I started the day going 600 metres straight up out of town. A Swiss woman with legs the size of tree trunks comes barreling by me. Asks where I come from and where I’m going and proceeds to give me every tip she knows about re: the best way to get there and where to stay. Mind you, she does all this in Schweizerdeutsch, a dialect that might as well be Swahili. I understood every third word (maybe) and nodded along, smiling like an idiot and saying “Danke” an awful lot.

At any rate, near the top of the killer uphill, this pretty little chapel:

And by the time I got there, I thought I was going to die on the spot. Had undertaken too much. This was supposed to be an easy day and I was exhausted. Done. Nauseous. Gasping for air. The last two big days were taking their toll on me.

And then I came to the sign at the bend in the road. Left pointed to my alpine way but the sign to the right pointed me to the little village I was supposed to pass through. I followed the green sign (via Alpina) only to come to another sign pointing me back down the hill. I walked back down and then back up and back down and back up and finally said “to hell with it” and decided someone had screwed up – I headed to the village. Half an hour later a trail joined the one I was on with all the correct signage. I still have no idea what happened. I was just happy to be on track.

But then I had to keep on uphill to the pass. I alternated dripping sweat, gasping for breath and thinking I was going to keel over with being in awe of the views. 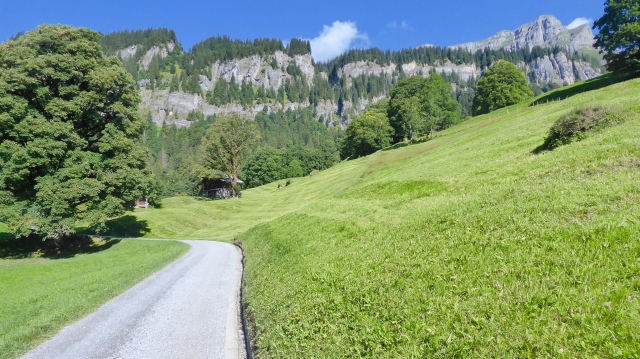 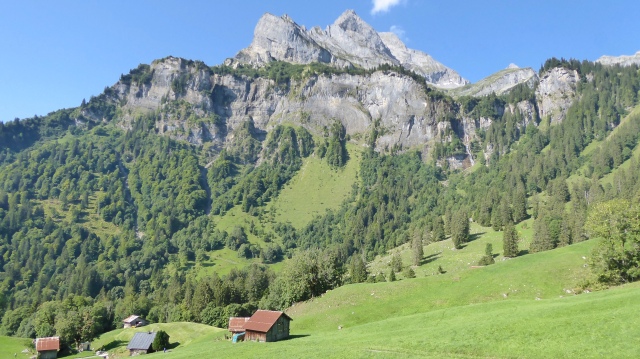 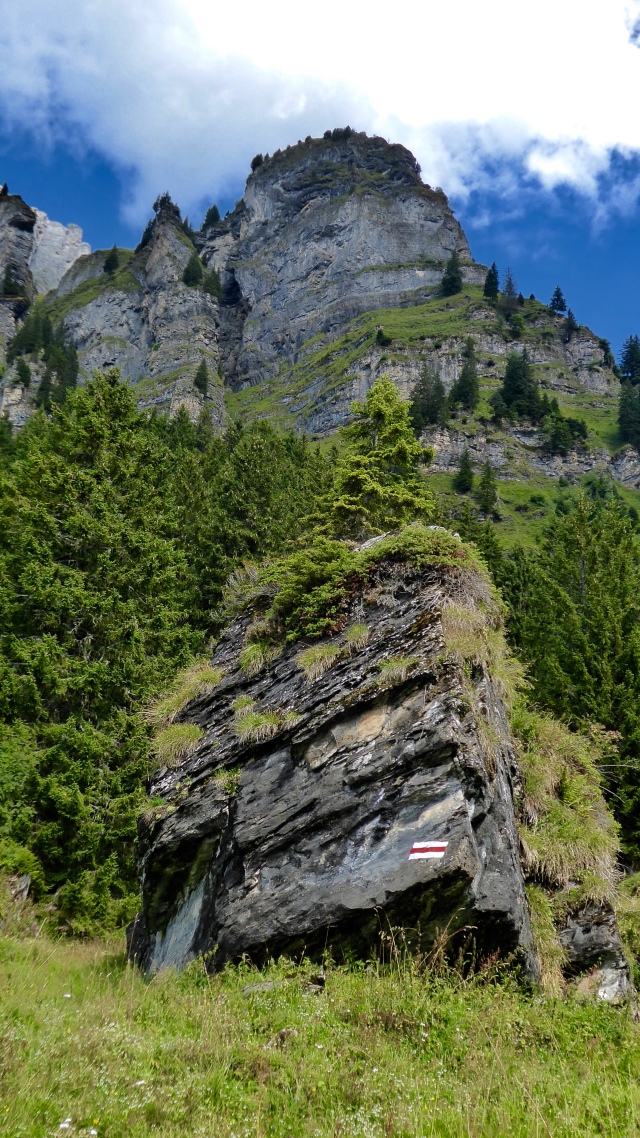 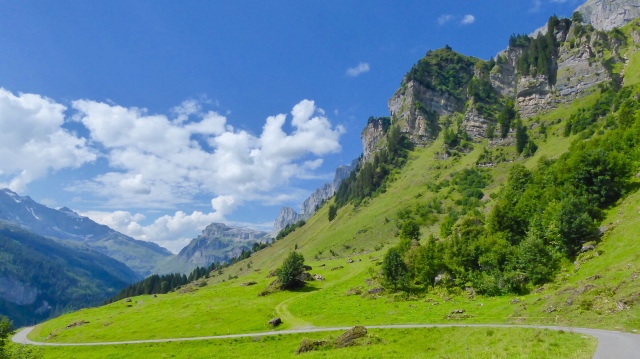 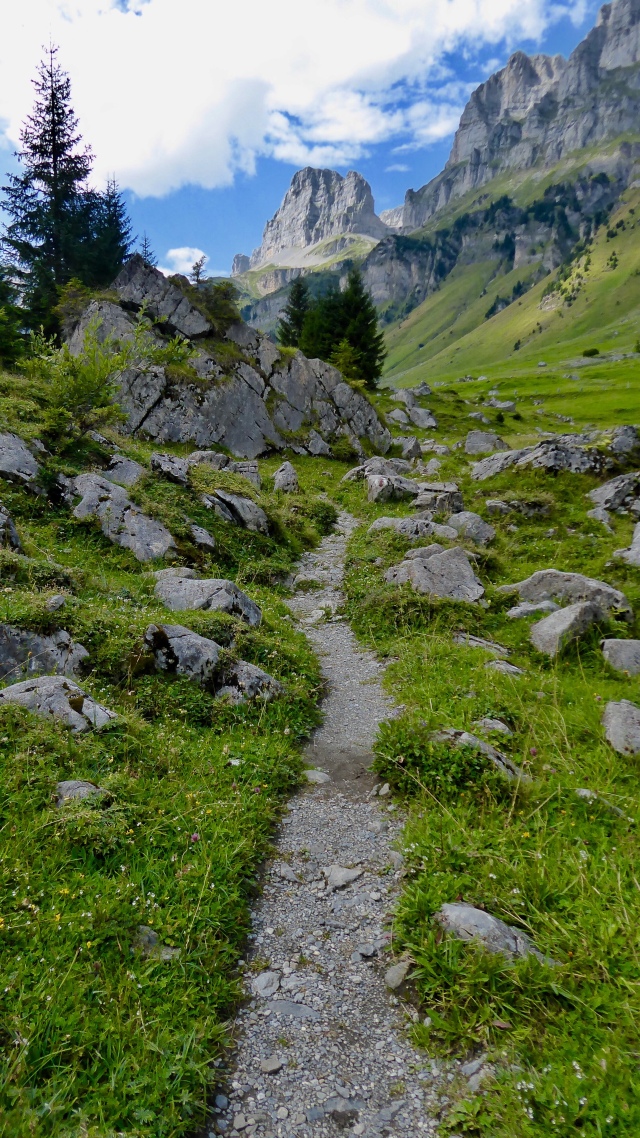 But let me also mention lunch. I sat down on a mossy rise below the pass and unwrapped my big sandwich. As usual, a pickle and huge hunks of alpine cheese from a local farm. But what was remarkable was the butter. You’ve probably heard the term “sweet butter” and maybe thought it was just one of those descriptions that means “not salted.” Let me set you straight. The hotel owner had slathered butter on this bread so thick he may as well have put the entire brick in it. And it was sweet. The flavour triggered a memory so old I couldn’t place it but this sandwich didn’t need cheese – just the thick, sweet, sweet butter – so creamy it actually was cream hardened just enough to be called butter. I could write a poem about this butter. Maybe I will. Suffice to say, this is what real butter is and let me tell you, it is food of the gods.

So, after that, I limped downhill on extremely sore feet with all kinds of hot spots and made it to my village of the day: Urnerboden. This is a tiny place. It is the only place I have ever had to bushwhack through to get to the village centre. Really. There was a trail up to the centre but it vanished and turned into a marshy field and when I asked a woman in her yard how to get to the church/hotel on the hill, she pointed straight across the yards and little fields. So bushwhack up I did. This is the only lodging in town. Sketchy Internet. Room with a view. I was able to stock up on snacks at the village store, which is attached to the church. Really: you walk from the shop into the church. Why not? Got blueberries, chocolate, more electrolytes, and trail mix.

I was feeling a bit concerned about my utter lack of energy today. I thought I was probably not getting enough calories. Am attempting to up them. Trail mix is good – high quality calories. Am also attempting to pour even more liquids into myself and a ton of electrolytes every day. Tomorrow I shall duct tape my toes. My boots look like they have been through a cow-patty war. Oh wait! That’s because they have been!

Tomorrow is a 26k day but only 700 metres. I am beginning to have second thoughts about the idea of “cheating” by taking a bus now and then. I have already determined that I will absolutely cheat on stage 6 which is 2000 metres over 30k and estimated at 10 or 11 hours. There is no way I am doing 11 hours! The book even recommends lopping off the first 3.5 by taking a bus on the uninteresting approach route. Yup – I don’t even think that’s cheating. Sounds like common sense to me.

2 Responses to Via Alpina – stage 4