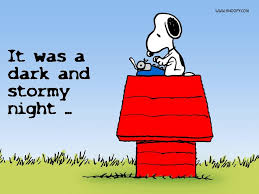 Hell – it’s also been a dark and stormy day.

But seriously folks. Let’s talk about the life of a writer. I fear it is beginning to drive me to drink.

Some time in October (I think it was October) I noticed, once again, the annual CBC Short Story Writing Contest. And this is a VERY short story – 1600 words. Hell, I thought – I can do that.

So I did. I wrote what was to become the first of (by now) 60 stories. The title was “Home.” I finished it and sent it off. I thought it was good. I was proud of it. I had a good feeling about it. In fact, I was so excited, I started writing more – and more and more and more. I had found it – my niche – short stories.

I let other people read them. I got good reviews. I sent some off to various publishers. I have not heard back yet. I don’t know if I ever will.

Today, CBC put out the long list of the short story entries. I was not on it.

I have not felt so discouraged in a very long time.

I just don’t know. There are thousands of writers out there. Many of them are good. All of them are looking to be published. The competition is crazy. As I said, I feel discouraged.

I don’t think anything is more difficult than being a writer. I don’t mean in the sense of getting paid to write “copy.” Let’s face it, I was earning a decent living as a journalist for twenty years. I’ve had five books published. But when you get away from the “paid writing assignment” gig and start putting yourself to work in the areas where your passion lies – well then – that’s a tougher life altogether.

And I’ve seen some atrocious writing.

Yeah – I’m feeling frustrated. I’m also feeling sad and a bit lost. Writing for me is like hiking. I just do it. It’s part of my life in such an intimate way that it’s really a big part of who I am.

But I have to wonder: is it worth it? Do I keep doing this? If not – then what?

What I really need to do is get away for a while. I really do. I’ve been trapped here in this place through a tough winter. I’ve filled it with writing and snowshoeing. The snow is slowly disappearing. I feel like I need to shake it all off – get some perspective. Think, feel, be – get away.

Whew. Quite a rant.

But I had to get it out of my system. I feel a bit at sea. But that’s the point, isn’t it – get out to sea – in order to get from here to there you have to get into the middle of the ocean. Staying in a safe harbour gets you nowhere.

2 Responses to Being a Writer